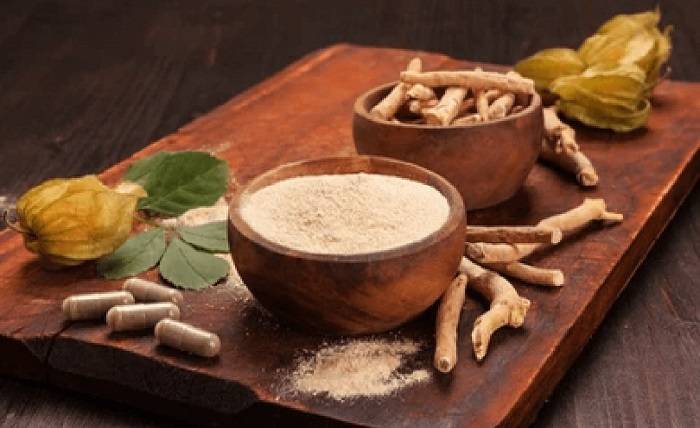 Ashwagandha is an herb, and it is essential in Ayurveda, which is a traditional form of medicine based on Indian principles of natural healing. It is found in nature as a small shrub with yellow flowers, and it is native to India and Southeast Asia.

In Sanskrit, its name means “smell of the horse,” which refers to the herb’s strong scent. It has many potential health benefits associated with the usage of its leaves and roots. Because of its potential medicinal benefits, studies have been conducted to see how it can alleviate certain problems.

Research has suggested many different benefits from the usage of ashwagandha, and seven of them are outlined below.

Ashwagandha is a herb that is also classified as an adaptogen, which are natural substances in nature that can help the body adapt to and cope with stress. Ingesting the herb appears to help with cortisol levels and proteins like Hsp70 (heat shock proteins) and JNK-1 (c-Jun N-terminal protein kinase). It is also thought to interact with the hypothalamic-pituitary-adrenal axis (HPA), which regulates stress responses by reducing its activity.

Though research certainly suggests its potential to reduce stress and anxiety, more research is needed to confirm this benefit.

Though the research is limited, there is some evidence that suggests ashwagandha may be beneficial for individuals struggling with diabetes or high blood sugar. Out of 24 conducted studies, which included several clinical trials with individuals who have diabetes, ashwagandha was shown to reduce blood sugar, insulin, blood lipids, and stress markers.

Researchers believe that one of the herb’s compounds, such as withaferin A (WA), may stimulate cells to take in glucose from the bloodstream. Ashwagandha may have antidiabetic activity, but the research for it is still very new.

Though there isn’t much research available, at least one clinical study shows ashwagandha’s potential positive effects on women with sexual dysfunction. In this particular study, the participants reported that ashwagandha helped with arousal, lubrication, and orgasm.

Ashwagandha may have benefits for men as well. Studies conducted with the herb indicated that the herb might help boost fertility and increase testosterone levels.

In one study, a group of men took either a tablet with ashwagandha or a placebo for eight weeks; after, the treatment was associated with an 18% increase in DHEA-S, which is a hormone involved in the production of testosterone.

Another study indicated the herb might improve sperm quality after 14% of the participant’s partners became pregnant.

A few studies have shown that ashwagandha can promote heart health. In the studies, the herb increased VO2 max levels, which is the maximum amount of oxygen you can take in while exerting yourself. VO2 levels are used to measure cardiorespiratory endurance or how well the heart and lungs work together to move oxygen to the muscles during physical activity.

A higher Vo2 max level can indicate a healthy heart. There is still much room for more research on the topic.

Many of us struggle with getting good sleep, and there is a large group that suffers from sleep disorders. Ashwagandha has the potential to promote restful sleep, and it may even alleviate sleep issues.

One study with 50 older adults found that 600mgg of ashwagandha root a day for 12 weeks improved sleep quality and mental alertness. Five other studies suggested that the herb may have a positive effect on the overall quality of sleep.

More research and human testing are needed, but the findings are promising.

Ashwagandha may also help with finding mental clarity, as it has potential benefits for cognitive function. Some studies have suggested it could improve cognitive function in older adults and individuals with schizophrenia. Some of the functions it may benefit are:

Ashwagandha has been linked to improvements in attention, immediate and general memory and information-processing speed.

There are many areas in medicine where ashwagandha can be very helpful; with time and research, more of these benefits will be realized. There are many forms to find the herb in, and ashwagandha drinks are also available on the market.